Difference between revisions of "TWUser Admin" 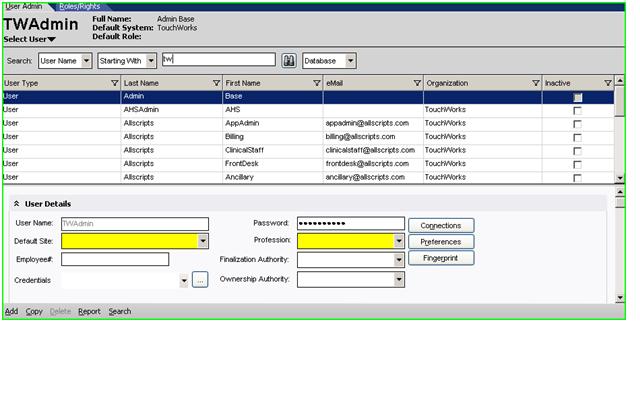 User Name – usually an abbreviated form of the user’s name, such as Last name and first initial of the first name. In many cases it is a good idea to mirror the user’s user name from other accounts such as Windows.

Password – a code unique to that user and known only to them to log into the system.

Default site – a physical location that is using the EMR such as a Pediatrics office. Printing defaults are typically assigned by site.

Employee # - Indicates the employee’s identification at the organization.

Finalization Authority – the level at which the user can finalize a document. A user can still create, sign, and save a document even though they do not have a high enough finalization authority.

Credentials – the users credentials such as: RN, MD, MA

Force Password Change – by checking this box, the next time the user logs in the system will force the user to change their password.

Electronic Workflow – by checking this box the user will participate in the electronic workflow such as electronic signature.