The delegated task feature in Enterprise allows organizations to shift the responsibility of completing a task from the "assigned to" user, to a different user who will be triaging the task and/or actually completing the work. For example, perhaps an organization has a nurse or two who handle all Rx related tasks: medication renewal requests, calling in prescriptions to the pharmacy, troubleshooting why electronic prescriptions failed to transmit to the pharmacy, etc. In these cases, the "assigned to" user may be the Ordering Provider, but the tasks can and should be delegated to the clinical staff who will be responsible for fielding the request or issue.

There are important considerations and critical steps involved when setting up delegated tasks in Enterprise. The purpose of this wiki is to provide an outline so that delegated tasks in the EHR really work for your organization.

The first step will involve workflow design discussions to determine which tasks will need to be set-up as delegated. For example, in our Medication Renewal Request example, the organization might decide that when a call or request comes into the clinic:

Once the design discussions clear up the specific tasks that will be delegated, then the configuration work can begin. The first step will be to mark the task as delegated in the Task Name dictionary - and this step is easily accomplished via checking the 'delegated task' box as shown: 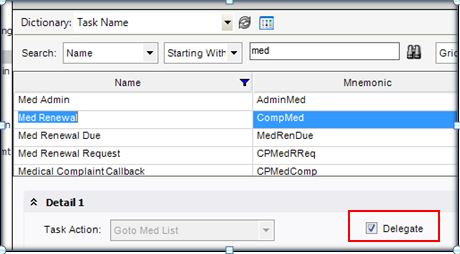 By checking the box, we have accomplished two things: 1. We have now effectively made sure that the task will NOT show up in the 'assigned to' user's My Active Tasks task view. 2. We have now set the delegated flag as one of the criteria that may need to be accounted for when directing that particular task to a different task view.

So it's important to understand that if all we did was to check off the delegated task box in the Task Name dictionary, we would be in trouble because the 'assigned to' user will not see the task and unless we ensure that we have accounted for the task in a new/different task view and assigned it to a different user - then the task is not going to appear in ANYONE's task view to work -- this is how tasks get lost in the EHR!

The next step will probably involve creating a new task view, where the Delegated Flag criteria is either set to 'Y' or is not included as a criteria for any of the tasks in the task view, as shown below:

Alternately, it might be possible to use an existing task view, as long as the Delegated Flag = Y criteria is true for all of the tasks included in that task view. 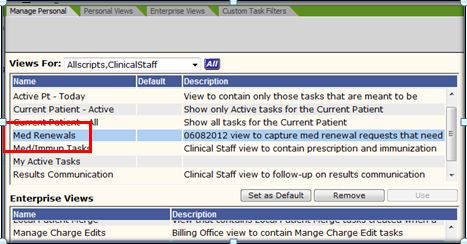